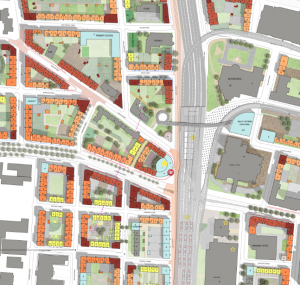 This masterplan focused on the Western Flank of the M8 Motorway, namely the Charing Cross and Anderston areas. While many of the other masterplans produced this year focused on large- scale interventions on the motorway, Maria and Sean focused and better integrating the motorway into the existing Urban Fabric and trying to alleviate some of the problems that are caused by the motorway, without having to rely on large funding or big changes in the City.

The Central Glasgow section of M8 motorway has become as much a synonymous landmark of the City as any of the Georgian or Victorian masterpieces throughout the Conurbation. However a single entity whatever it may be; should never be allowed to impose such Physical and Psychological influences over its surrounding environments, an imbalance the West Flank Masterplan seeks to address.

The Masterplan Area focuses on the transitional zone between Glasgow’s City Centre and West End along the Western Flank of the former Inner Ring Road, centring particular attention on Junction 19 in Anderston. An area that has been identified as demonstrating many of the negative characteristics associated with the motorways construction in 1968. The primary objectives are to urbanise the motorway, maintaining its vital national and international connectivity whilst creating strong humanised urban facades, improved multi-modal permeability and legibility around Junction 19 alongside diversification of traffic movement with particular attention on the installation of public transport infrastructure.